A big THANK YOU to the Berks County Community Foundation for the following grants:

Reading Musical Foundation awarded a $20,000 grant for the 2018-19 season for the following programs:

Your support is appreciated to help keep choral music in our community.
Thank you!

Another way to support RCS - Shop Amazon using the link below. No extra cost to you and RCS may benefit thru the Amazon Associates Program and/or Charitible Donations (Amazon Smile Program) Support RCS - Link To Amazon

Thank you to all of our sponsors and patrons who help make our concert season possible. Each year we expand our Community Outreach programs through such events as Gloria Singers, Summer Sing, and mini-concerts at various retirement centers. These programs would not be possible without the financial support of our patrons and sponsors. 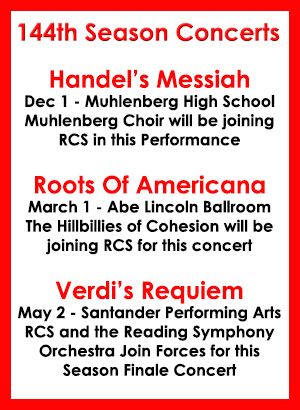 Click Here For Detailed Award Information, including other outstanding students recognized by RCS

To order tickets, use the online Ticket Ordering option on the website. Tickets would be picked up at the Ticket Desk the day of the concert. Tickets may be paid for when picked up, or paid ahead of time via the 'Buy Now' option. Or, call the RCS office at 610-898-1939

The Reading Choral Society has artistic collaborations with many young singers.

The Albright College Concert Choir in Nov. 2002,  joined RCS for our “Songs of Democracy” program performing their own selections and with the choir for Howard Hanson’s Song of Democracy .

When the RCS performed Handel’s Messiah in April of 2004, an audition was held for the solos from area college vocal performance students. The RCS gave a stipend to the young talented voices that were chosen. This performance gave the young singers a professional debut with a chorus and orchestra. The soloists were Jacqueline Dunleavy Boyle, soprano; Mary Beth Gray, Mezzo Soprano; Kevin S. Brisbin, Tenor; and David Bowman, Bass.

In 2007 The BCCC Master Singers performed Rachmaninoff  Divine Liturgy of St. John Chrysostom, Op.31 , as the introduction choir to the RCS performance of Rachmaninoff Vespers.

In 2009 the Daniel Boone High School Choir performed at the RCS Fall Concert, having won this opportunity through submission of a demo recording of their work.

In 2011 The BCCC’s Master Singers joined RCS in a performance of Mozart’s Requiem.